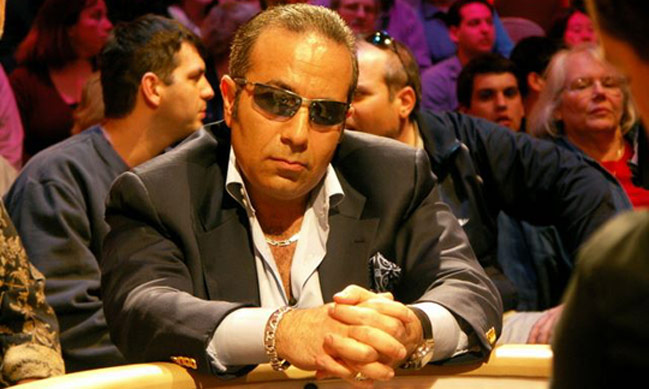 Above: Sammy Farha is regarded as one of the best Omaha players in the world.

You might be an experienced Holdem player and a winning one but if you’ve never played Omaha you should definitely try it.  Omaha is a drawing game that sees more action and bigger hands made with multiple way pots and if you master it you can profit from weak players.

There are limit, pot-limit and no-limit variations of Omaha as in Holdem but it is the pot-limit version that is the most popular form of Omaha.  With pot-limit you get pots that can grow quite big after the flop while you can still afford to see flops and play drawing hands against aggressive pre-flop raisers.  The Holdem maniacs that try to bluff players off hands in pot-limit Omaha only end up creating bigger pots for the knowledgeable Omaha player that has pot odds and outs to stay in the hand.

The game is played exactly the same as Holdem but the big difference is that you get four hole cards instead of the usual two you receive in Holdem.  These extra cards make a dramatic difference to the fequency quality of hands you can make with straights, flushes and full-houses common occurrences.  A set (3 of a kind) in Holdem is a great hand especially when hold two of them in your hole cards but in Omaha it’s not such a powerful hand and if you make this hand on the flop you need to bet out to protect it as your opponents will be drawing to better hands which they may be favourite to do so over your made set.

In Omaha you have many more playable starting hands than in Holdem where there is a much smaller spread of hands you should be playing.  It’s common to see four or five players contesting a pot in Omaha as the very best hand in Omaha A-A-K-K double suited is only a 60-40 favourite over the worst possible starting hand. 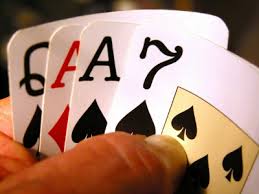 Just because there are so many acceptable starting hands you should just still be selective and look to only play the better ones.  You will want to play high cards that ‘connect’, these are cards that can make multiple hands like straights, flushes and full-houses.  Ideally all four cards would connect, a hand like J-Q-Q-K double suited would be a great starting hand as it has great potential to make a high straight, a flush as the hand is double suited and a full-house as you have two queens.  If the board hits with any high cards you will have either made big hand or be drawing to one.  Having cards that all connect with each other makes for more possible hand combinations and this is what makes a great starting hand.

Hands with smaller value connected cards are also playable but you need to be wary after the flop for bigger hands, if you have made a straight or flush your opponent may have made a bigger one! You can also play 3 connected cards like 3-J-Q-K – the 3 doesn’t connect with the other cards in your hand but you the other cards connect and you could get lucky with the dangler card and hit three’s on the board.

Just like in Holdem there are three rounds of betting.  If you have hit your hand and it’s vulnerable to being out-drawn you need to protect it so bet out and make your opponents pay to stay in the hand – you don’t want to give them a free card to beat you if you can get them to fold.

If you have a good drawing hand then you can either take a free card or raise to build the pot as you drawing hand may be favourite over an already made hade of your opponents like a set.  If you check and then you are raised then you need to calculate whether you pot-odds are worthy of you staying in the pot, are your drawing to the nuts or near nuts, how many outs do you have and what does it cost to stay in the pot?

You could try bluffing at the pot but this would rarely work on the flop unless it was a really tight player you were up against.  Bluffs work best on the river when your opponent may have missed their drawing hand or made a hand that is not the nuts – a bluff may get them to lay down a marginal hand.

Sammy Farha (pictured above) is regarded as one of the best Omaha players so you check out his book ‘Farha on Omaha’ for his insight on playing Omaha and learn from the master.

Omaha Indicator is a great piece of software for the novice Omaha player that automatically calculates your outs and pot odds.  It also features a heads-up display that profiles your opponents so you will have a better idea of how good the players are you are up against and their playing style.  It also rates your hole cards; Omaha Indicator is especially useful if you are multi-tabling Omaha.